We found this great old burger place right around the corner from us. Yummm....

Posted by Chris and Izumi Martin at 7:47 PM 2 comments:

Back in March Izumi and I had the opportunity to spend a day in Tahoe with some good friends of ours from church - Julian and Ira Sayhaydak (Izumi likes to pronounce this "say-hi-duck"). We had a great time and enjoyed some truly exquisite cuisine (see the pictures!). Stunning vistas and wonderful fellowship, sometimes you really suffer in the ministry.... :)

Here are some pictures from our day in San Francisco. Even though it was Labor Day, there were hardly any people around and the traffic was great - incredible!

P.S. I am married to the most amazing woman in the world.

Posted by Chris and Izumi Martin at 12:46 PM No comments:

Posted by Chris and Izumi Martin at 7:31 PM 2 comments:

Only in San Francisco...

Posted by Chris and Izumi Martin at 4:22 PM No comments:

Posted by Chris and Izumi Martin at 2:34 PM No comments:

From the skilled digital paintbrushes of Natalie and Emily. Enjoy. 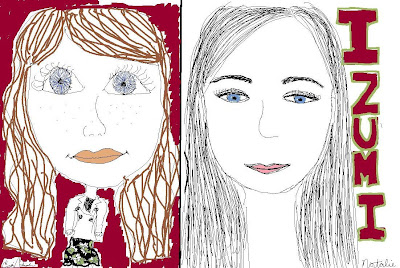 Posted by Chris and Izumi Martin at 12:36 AM No comments: 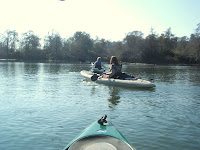 Since my last post a few weeks have passed. During this time we have been enjoying the settling in process as we slowly start to get into new routines and develop at least the beginnings of a more regular schedule. This is not to say, however, that we have had no adventures. 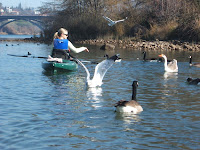 Izumi has quickly made friends with, well, most of the folks at the church already. One of the ladies, Jean, enjoys outdoor activities and invited Izumi and her friend Natalie to go kayaking on the nearby Folsom river. She had a great time paddling about the beautiful Sacramento scenery and disturbing the local water fowl. 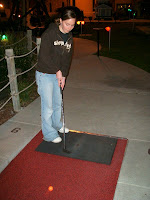 We also recently enjoyed visiting a local put-put golf center and engaged in a vigorously competitive test of eye-hand coordination. As you can see from the pictures, Izumi has a natural poise, smooth stroke, and accurate ball strike. 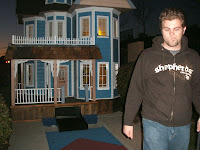 Myself, on the other hand, quickly came to the realization that this game is really quite juvenile and silly. I would post our final score card, but it seems to have gone missing…
Posted by Chris and Izumi Martin at 12:19 AM No comments:

Rollin’ in to Sac-town

There is an old saying:

You never know what you have until it is gone.

I suggest an alternative to this sagely piece of wisdom:

You never know what you have until you move.

It was simultaneously daunting and humbling to pack up for our move to Sacramento. The sheer volume of physical blessings the Lord has lavished on us is amazing – especially when you are carefully wrapping each piece and trying to fit it into a box. The whole affair took about a week of pecking away at things here and there, with a final serious push of about two days. We were served so richly by several people from our Bible study, including Mike “the Tetris master” Cowhick, without whose expert truck-packing-prowess we wouldn’t have been able to fit everything.

We were also completely shocked when a good friend from Sacramento, Andrei, showed up on our doorstep to help us move. He had started driving down at 3am to help us load the truck, and didn’t get back home until 3am the following morning – only to come back and help us unload the truck! As we move from one family of believers to another, we cannot help but be overwhelmed by the love being expressed from both. 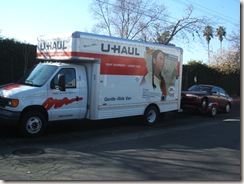 Beautiful, isn’t it? I felt like a real trucker cruising up I-5 in this 17’ box truck with our car in tow. I particularly felt like a trucker, however, while refueling it! Praise the Lord for the recent drop in gas prices, or else we would have bankrupted ourselves on the journey up. 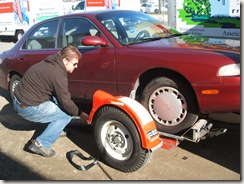 Once we arrived, I took it upon myself to lift the car off the dolly as you can see in the picture. I kept thinking there must be an easier way to get the car back on the ground, but such is life. Izumi kept trying to say something about extending the ramps and backing the car down, but I couldn’t understand her – guys are much better at this sort of thing anyway. 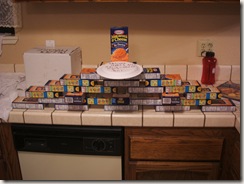 To properly christen our new home I decided to lose something special the night we moved in. Since I was feeling particularly inspired – I chose to lose the house key. Being that we were given no spare key, and that the property management company had no spare either, our door was necessarily left unlocked for the first few days.

I mentioned this fact to a few friends at church on Sunday. When we returned home later that afternoon, we were greatly surprised to find that someone had illegally entered our apartment and…left a humongous pile of Macaroni and Cheese (the pinnacle of culinary evolution) on our counter. It was one of those defining experiences in life. My heart still warms every time I think of it. Needless to say, we are already feeling at home here and rejoice in God’s goodness to us.

P.S. I have since purchased and installed a formidable deadbolt – so don’t get any ideas…
Posted by Chris and Izumi Martin at 9:37 PM 1 comment:

Walking in a winter wonderland... 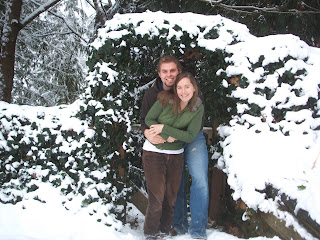 After much silence, it is time to begin updating this blog again. With seminary now behind me, I would like to use this blog to keep friends and family updated on what the Lord is doing in and through us as we begin this new adventure of ministry.
First, however, a brief update about the Christmas season. After languishing under the eternal blue skies and balmy temperatures of the Los Angeles area, it was a refreshing change to visit Marysville, Washington again for Christmas. More snow fell this year than has fallen since 1861!
Izumi and I greatly enjoyed relaxing (recuperating...) after a long home stretch finishing seminary, and enjoyed being with family again.
Posted by Chris and Izumi Martin at 8:33 PM 1 comment:

This picture captured the evening glow following a lovely sunset as viewed from my seminary classroom building. It seemed a fitting picture to capture the close of my seminary career. Izumi and I eagerly await the dawning of a new ministry opportunity in Sacramento that will break upon us shortly. Praise God for the changing of seasons. We will miss those we love here in Santa Clarita, but joyfully look forward to forging and developing many new friendships in our new home.

Posted by Chris and Izumi Martin at 3:46 PM 2 comments:

Chris and Izumi Martin
Spokane Valley, Washington, United States
Welcome to our blog! This little piece of the digital landscape will be a place for you all to keep in touch and up-to-date with what God is doing in our lives. Please leave comments and other thoughts here, and don't forget to keep us in your prayers!